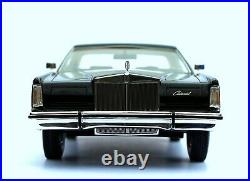 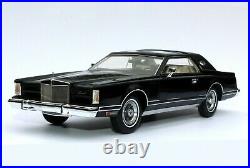 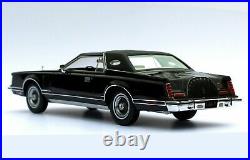 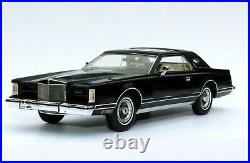 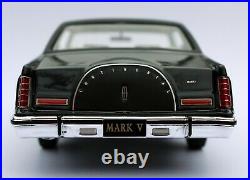 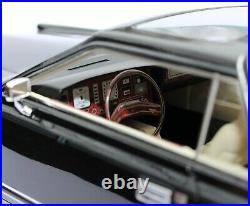 Official Release Date: January 19th 2019. As the 1970s wound down and American cars were being downsized left and right in the face of climbing gas prices and tightening emissions standards, Ford Motor Company was readying a redesign of its luxury flagship, the Lincoln Continental. The previous model, the 1972-76 Mark IV had been a huge success-emphasis on huge. It outsold its rival in the plus-size personal luxury market, the Cadillac Eldorado, and at more than 19 feet bow to stern it out outstretched it as well. When it came time to redesign the Mark IV Lincoln could have followed the trend toward downsizing, but instead they doubled down on the formula that had brought such success-and stretched its length an additional two inches to 230! It rode on the same chassis-the 120-inch wheelbase it borrowed from the previous generation T-bird. The body was lowered slightly and its angles sharpened and flattened, making the car look even longer (although the weight was reduced by a couple hundred pounds). Designers also slathered it with every luxury styling cue in the book-hideaway headlights, porthole opera windows, Rolls-style upright grille, and signature Continental kit faux vertical spare tire bulge. The squared off styling looked modern, but the Mark V was a rolling tribute to the classic American luxury formula. This serene boulevardier incorporated some new styling elements as well. The standard roof was now steel, but the previous vinyl roof was an option, as was a partial vinyl Landau roof that covered the C-pillar and rear quarter of the roof. Buyers could now opt for aluminum wheels in place of the standard steel units too, and beneath them four-wheel disc brakes. The V did make a concession or two to the times; with oil crises becoming a regular occurrence in the 1970s Ford decided the previous 460ci big block wasn’t quite fuel-efficient enough, so the Mark V received a long stroke 400 small block with a miserly 2-barrel carb as the standard powerplant. Horsepower fans could still order the 460 4-barrel as an option (as long as they didn’t live in California) through 1978. 1978 also marked the 75th Anniversary of the Ford Motor Company, and to commemorate it released the most extravagant Lincoln to date: the Mark V Diamond Jubilee Edition. They also had several exclusive features. Front seat passengers were coddled in unique power-adjustable bucket seats, and vinyl covering over the continental spare to match the Landau top. That top includes special coach lamps and unique opera windows with “Jubilee Edition” scripts engraved into them, with the’i’ dotted with an authentic diamond chip. Please note: Curbside Models. Curbside means these models have no articulating features other than the wheels do roll. It is the same as if you were walking down a street and saw a 1968 Cadillac Fleetwood Eldorado sitting by the curb. Factory Flawed model may have decal or paint challenges, parts missing or dislodged. Automodello does not disclose what the Factory Flaw is/are only that the model is designated as Factory Flawed. Any parts that need to be reattached are included or may be requested from Automodello, subject to availability. This item is in the category “Toys & Hobbies\Diecast & Toy Vehicles\Cars, Trucks & Vans\Contemporary Manufacture”. The seller is “diecasm” and is located in this country: US. This item can be shipped worldwide.